Essentially bronze is a copper alloy, a mixture of copper and other metals. Copper on its own is a soft metal. However many, many years ago someone discovered that by adding a small amount of tin, the combination of the two created a harder metal – and so bronze was born.
For centuries bronze meant copper and tin, often 90% copper with 10% tin. Over time other combinations have developed. Adding zinc to copper gave an even harder metal, brass. Also a combination of lead, tin and zinc was added to copper; this is sometimes referred to as ‘gunmetal’ bronze and has been the traditional standard for much of the statuary bronze - often in a common combination of 85% copper, 5% tin, 5% zinc and 5% lead.
However more recently metallurgists found that adding silicon to copper created an alloy that poured and welded easily. Although silicon is not a metal this combination, often 95% copper, 4% silicon and 1% manganese, is referred to as Silicon Bronze. It is now popular in many foundries where the ease of casting and welding is much appreciated. However it is difficult to work with after casting because of its hard nature and it is also less porous and makes applying the patina more difficult. Therefore for many the traditional bronze alloy is still regarded as the best for sculpture.

How to create a bronze sculpture.

We will now try, in as simple a way as possible, explain some of the intricacies of the ‘lost wax’ process. There are many variations within the process but throughout the process follows strict progression. 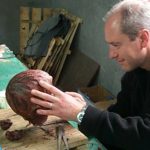 We must always start with the artist’s creation. Normally the artist will work in clay or in wax depending on the size and nature of the piece they are creating. For a small piece this may be all he needs otherwise they must first create an armature, a structure using metal, wood and other material onto which the artist can apply the clay or wax. Using simple tools the artist can create sculpture limited only by their skill and imagination but now we must turn it into metal.

The Mould
We must now allow ourselves to create duplicates of the original by making a mould. It may look a destructive process, particularly with larger sculpture that need to be cut up into sections to allow moulds to be made however through this we are able to replicate the original sculpture and make the number of pieces the artist requires.
After applying a releasing agent to the original, rubber is applied to the surface of one side of the mould in several layers building up a thick layer. This side is then covered in a resin jacket. This keeps the mould in place and stops it from distorting. The sculpture is then turned over and the process repeated. ‘Keys’ are created to make sure that the two sides of the mould meet correctly and can not be misaligned.

The Wax
Now using this mould we can create any number of wax copies of the sculpture. Molten wax is poured into the mould and swilled about so that the whole surface of the mould is covered in wax. The excess is then poured out. This process is repeated until the wax is considered thick enough to allow for casting. The wax is allowed to cool and then the mould opened. A hollow wax copy of the original sculpture will appear. Skilled craftsmen will then touch up the wax carefully removing any blemishes, filling holes, removing excess wax while ensuring sharp lines and a perfect surface.
Often at this stage the artist will then take the time to inspect the wax before it is prepared for the next stage.
Wax sticks are added to points of the sculpture, often referred to as sprues, gates and risers, as well as a ‘pouring cup’. This, in essence, is the system that allows first the wax to escape and then for the molten metal to enter through the pouring cup down the sprue and then gates while the air escapes through the risers.

The Shell.
Most foundries now use a ‘ceramic shell investment’ for this stage.
Using a metal rod that is attached to the pouring cup, the wax is dipped into a ‘slurry’, a silica mixture, which sticks to the wax. The wax is then dusted with ‘stucco’, a powder that will stick to the slurry. At first a very fine stucco is used to ensure all the fine details are not missed. Then as the layers are built up coarser stucco is used to give more strength. At each layer the piece must dry before we move on. 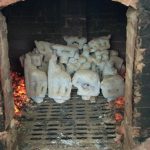 The process called “lost wax” casting derives it’s name from what happens next. The shell is heated while upside down so that the wax melts and pours out of the shell through the pouring cup. This then leaves the shell with a hollow which is an exact negative of the original sculpture. The shell is then placed in a specialist oven to bake. While we wait for this the furnace is fired up and the bronze ingots placed in the cauldron. The temperature will rise to around 1250ºC to allow the bronze to melt and be fluid enough to pour.
Once the shell is ready it is removed from the oven and half buried in sand to support it and stop it falling and breaking. Molten metal is taken from the cauldron and carefully poured into the shell. The metal will fill the space vacated by the wax earlier and will rapidly cool. Taking a hammer we can break off the shell and out will appear the sculpture in bronze. 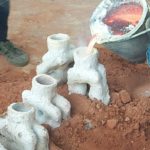 Chasing
The piece will now be cleaned with great care to remove all the remnants of the shell. The sprue and gates will be cut off and, if we had had to use several moulds, the individual pieces will be welded together. However we are not finished as skilled ‘chasers’ will ensure that all the detail of the original piece are there, holes will be filled, imperfections ‘chased’ out and they also make sure the fine details are not lost using various files and other implements.

The Patina
We now have our bronze sculpture but we must now apply the colour that we now all associate with bronze. Be it the traditional Verdi gris or dark brown or another more exotic finish, chemicals are applied under a fierce heat. This heat allows the chemicals to adhere to the metal; most finishes sit on the metal as opposed to being absorbed by the metal. A final coat of wax is applied to give it a wonderful shine and eventually you have your bronze in all its splendour.